Awards are presented at the following ceremonies:

Rod has been nominated by a number of community members for his significant contribution to a large number of voluntary groups in the Huon Valley.

During this time Rod also worked as the Principal or Vice-Principal of Judbury Primary School, Geeveston District High School, and Huonville High School. While working for these schools Rod volunteered to teach and conduct local school choirs, and he continued to volunteer in this role well after he retired. Rod was also well-known for giving his own personal time to assist students with personal or academic problems.

Rod is being recognised as Citizen of the Year for the huge amount of time that he has volunteered to a wide range of groups, and to his students, over the past 37 years. 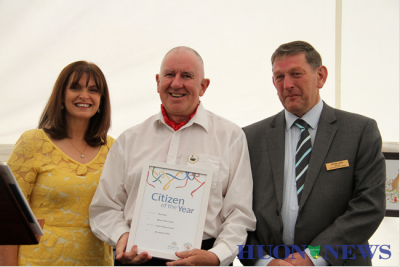 Young Citizen of the Year 2015

Keryn has been nominated by Sally Doyle for her exceptional community work.

Keryn is an active member of the Huon Pony Club and is always willing to help new, young riders. Keryn takes an interest in the Riding for the Disabled group, volunteers for the Kermandie Football Clubrooms Steering Committee, and she regularly involves herself in community events, such as the 100th Birthday Celebration event at the Geeveston Town Hall.

Keryn also participated in last year’s National Indigenous Youth Parliament, and was a finalist in the 2014 Sustainable Communities Awards for Youth Leadership.

Keryn is being recognised today for the volunteer and community work on behalf of a wide range of groups. 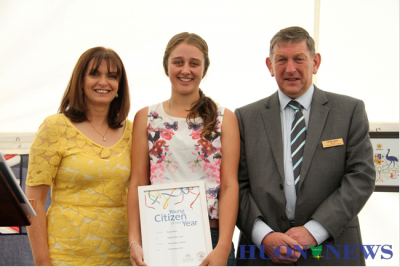 The next award recognises individuals who give more than 2,000 hours of voluntary service to their community.

The next award recognises those who have given outstanding voluntary service to the community for a number of years, in excess of 5,000 hours.

Craig Saunders is being commended for a life time of commitment to his community.

Over many years, Craig was an active volunteer in his community, and is acknowledged for his enthusiasm, organisational talent and energy that he displayed in the many facets of his volunteer work.

Craig became involved in the Huon Valley Concert Band in 1995 and since this time the Band has grown into a dynamic team, where more than 200 members (present and former) owe a large debt to him for his organisational ability, foresight and leadership.  The Huon Valley Concert Band is involved in many concerts throughout the Valley, and is an annual contributor to ceremonial occasions such as ANZAC Day and the Australia Day Awards event.  We welcome the band here today.

Craig also had a passion for the environment, and was the Regional Volunteer Facilitator South with the Parks and Wildlife Service.  He was involved with Wildcare Inc and was instrumental in this group accessing grants for environmental projects.  Craig was also a voluntary Editor for Wildtimes which promotes and highlights the efforts of others.  With his enthusiasm and energy, Craig had the ability to inspire others, and as a result many people have volunteered within their community.

Craig gave an extraordinary amount of time, energy and enthusiasm to the Tasmanian Sea Canoeing Club and introduced many people to sea kayaking.  Craig was Commodore of the Club for four years from 1998 to 2001 and Vice-Commodore during 2002 and 2003.  In his large shed at his family home in Pelverata, Craig assisted many people who couldn’t afford to buy a sea kayak to build their own boat and design and make the associated gear.  Craig was made a life member of the Tasmanian Sea Canoeing Club in 2010 in recognition of his generous and enthusiastic efforts.

Craig and his family moved to Pelverata and Craig became involved with the hall management committee and was elected President of the committee at his first meeting.  Craig inspired the small community and brought it back to life.  The hall committee is a hard working group of volunteers, and without it and similar committees, the Council would be hard pressed to provide facilities to the communities of the Valley.

Craig joined as a member of the Hobart Wheeler Dirt Devils cycling club in 2007 and played a significant role in the group’s activities over many years.  Craig became Volunteer Coordinator at a number of National Series events in Hobart between 2009 and 2011.  He was held in such high regard for his organisational abilities that when the internationally recognised Oceania MTB event was run in Hobart earlier this year, the Cycling Australia event manager asked for Craig personally to assist at the event.

We are proud to extend the Huon Valley Citizen of the Year Award to Mr Craig Saunders.

Young Citizen of the Year 2014

Natalia Clark and Samantha Kluga (Sammy) were nominated for this Award by Trish Doyle and I would like to read the nomination as it was received.

I would like to nominate Natalia Clark and Samantha Kluga (Sammy), as young citizens of the year. If they are not eligible for this award I would love for them to have some form of recognition or acknowledgement as I think that they are very deserving.   Also it is very important that they are both recognised or not at all as they are best friends and do everything together.

Natalia and Sammy make it cool to be kind. They are both very family orientated and are happy to help out young and old.

As long as I have known both girls they have always been lovely, kind and willing to lend a hand.  Both girls are involved in school sport with Sammy being named school athlete for 2012. Both are willing to represent their respective schools for sport or other duties. Natalia has been chosen to represent hers for the Beacon Foundation for 2014.

They have both represented their school for both Anzac and Remembrance Day services.

Both are very involved in Geeveston Girl Guides and went to Sydney with them this year. Before this trip they fundraised for the trip by selling raffle tickets, had a sausage sizzle and stall.

When my husband Gary passed away they were non-stop helping at his wake, making sure that everyone was fed and helping out at our Hardware with cleaning and running errands.

They helped to raise funds for the Steenholt family and helped with the Tom Duggan fundraiser.

The Cultural and Community Builders award is about acknowledging contributions made to the lives of residents through promoting skills, creating community and making connections through involvement in meaningful activities.

This award in 2014 is being awarded to the Huon Valley Expo.

The event not only brought together many volunteers to plan and organise the event, but to implement and direct the event on the day.  The Expo enabled businesses to exhibit and promote themselves to not only locals, but people from further afield, who were at times amazed at what a variety of products and services are available in this wonderful area.

More than 2,300 people attended the event, which is testament to the work the organisers did in promoting the Expo.

The first award is our Sports Award and is being presented to Rex Voss.

Rex has been involved with the Huonville Lions Football Club, helping in one way or another, for well over 50 years.  No Club could ask for a more dedicated volunteer than Rex.  He was made a Life member of the Club in 1969, and is still going strong.

Rex attends every training session during the football season, including the nights that the juniors train, and this takes up five nights a week.  He also attends every junior game held at Franklin and helps wherever he is needed – whether that be in the kiosk or with the timekeeping.

Not only does Rex help out with the juniors, he is always available to help the senior players.   During training sessions, whether it is pre-season from November, or throughout the regular competition season, he is found at the oval, recording the names of those who train – which is very helpful to the coaching staff.  He makes sure drinks are available for all players, and helps clean up and put away all equipment used.

On home game days during the season, Rex is at the ground by 8am to make salad rolls, and assist the kiosk staff.  Later in the afternoon, he will be in the interchange box recording players going on and off the field, which is a requirement of the Southern Football league governing body.  He acts as an umpire escort when required.

Each Friday afternoon he goes to the clubrooms to help sort out the jumpers needed for the teams playing on Saturday, and cleans up and around the ground, also sweeping down the grandstand and checking all is in order to make a good impression for visiting teams.

After football season has finished, Rex dedicates his time to the Huon Show committee, helping to get the grounds and surrounds ready for Show Day.  Not only that, for the past four years, he has helped the committee of A Taste of the Huon with their preparations.

The next award recognises individuals who give more than 2,000 hours of voluntary service to their community.

The next award recognises those who have given outstanding voluntary service to the community for a number of years, in excess of 5,000 hours.

Citizen of the Year
Angela Stride

Community Event of the Year
Hands Across the Generations

Citizen of the Year
John Driessen

Local Community Event of the Year
Music On The Beach Party