The mother and son duo have found that their lives often mirror each other.

They both became students in 2009 when Raquel, at 41 years of age, left the Philippines on her own to study in Tasmania whilst Steven (then 12 years of age) moved in with his aunt and grandma to complete high school. Raquel had been corresponding with a local man for six years before making the huge decision to leave her homelands and family in the pursuit of being able to better support her son.

Raquel’s student visa gave her six months to complete a Certificate III in Childcare, after which she completed the Diploma to give herself another year in Tasmania. Raquel secured full-time employment within walking distance of her home and Steven joined her about six years after she had first left the Philippines.

Raquel was keen for her and Steven to gain their driving licence and bought a car, hoping that friends and neighbours would be able to assist, but the car lay idle and the battery died.

“I think this is the time when someone opened the door for me.”

In 2018, at the age of 22, Steven was referred to the Gearing Up learner driver program by Ness, who was a volunteer mentor driver with the program and also originated from the Philippines. With the help of the program’s volunteers, Steven was able to pass his P test just before the COVID lockdown in March 2020 and Ness has gone on to become a professional driving instructor with her own driving school!

In October 2020, Raquel emailed the program to thank them for their assistance and to check her eligibility as she thought it was just for young people. When the co-ordinator said that it was for all ages, the 53-year-old was surprised: “I think this is the time when someone opened the door for me,” she said.

Raquel was determined and her black-and-white cushion became a new fixture in the Gearing Up car. She told her friends and family, “I am going to get my licence in June.” When asked why she had June as her goal, Raquel said she thinks it was because she never liked the pre-7am walk to work in winter.

Raquel celebrates long service leave this year – her first year without the predawn winter walk. Raquel sat her P test for the first time on 28 May 2021 and passed.

If you or someone you know needs help getting their licence, give Gearing Up a call on 6264 0300. 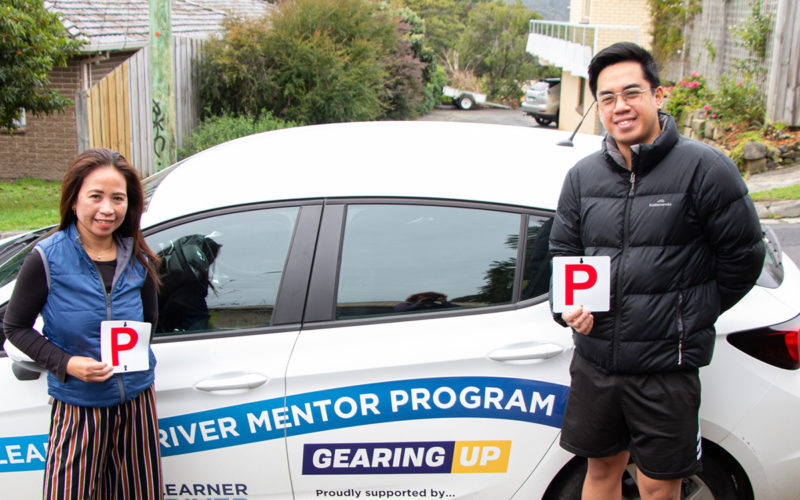