Australia Day festivities began early in the Huon Valley on the morning of Sunday 26 January 2020, with residents from throughout the region gathering at Geeveston’s Heritage Park to share a celebratory cooked breakfast in the lush surrounds.

Volunteers from the Lions Club of Huon, Huon Valley SES, Geeveston Fire Brigade and Bendigo Bank Huon Valley Community Bank Branches teamed up to run the barbecue, while the Huonville Scouts took younger patrons for a spin on the hurdy gurdy. Performances by the Day Star Duo and Huon Valley Concert Band provided a crowd-pleasing soundtrack for the relaxed and joyous occasion.

“Council would like to recognise and thank all the amazing volunteers who pitched in on the day, and the members of Council staff who worked hard to organise and host what was an excellent event,” Cr Enders said. 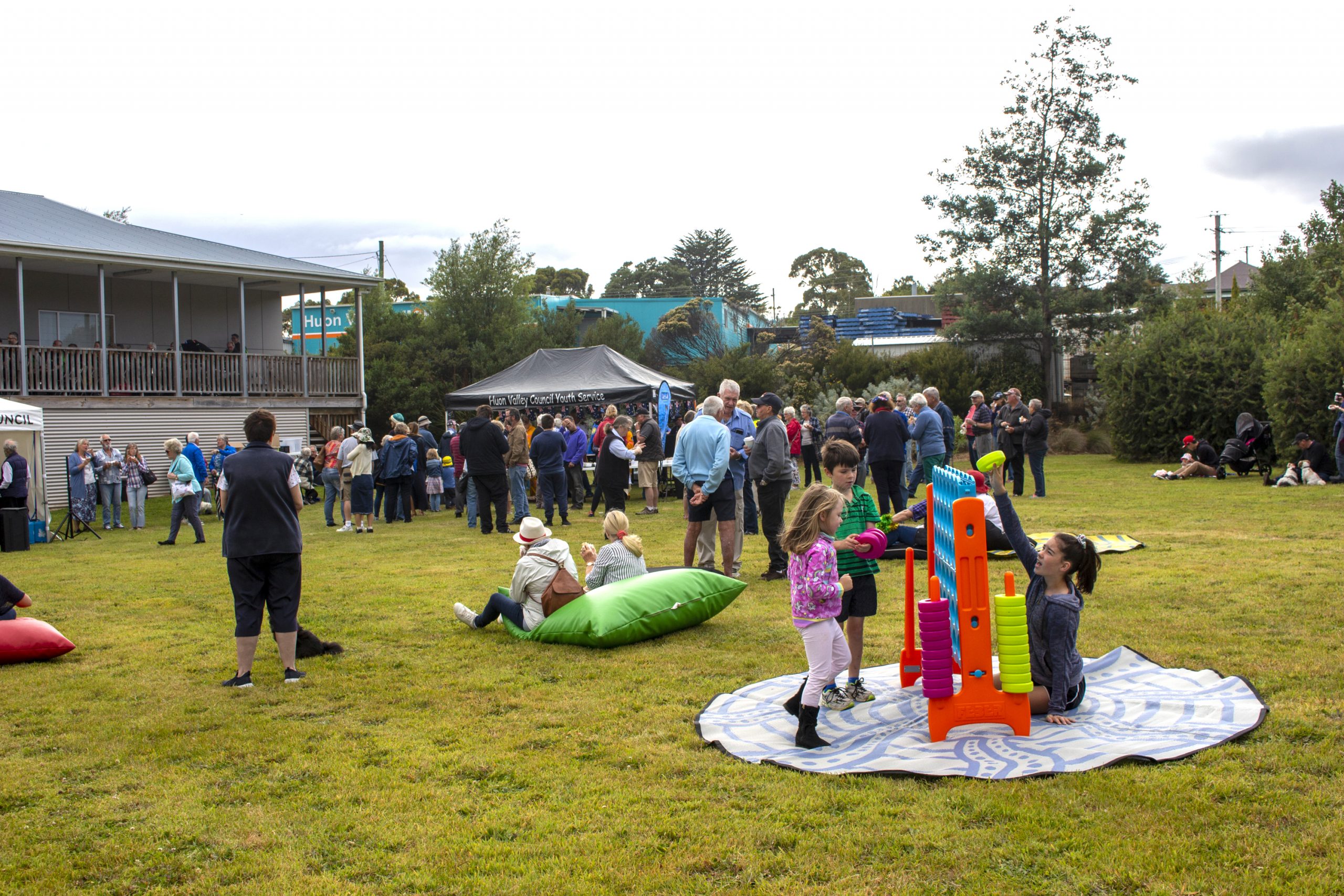 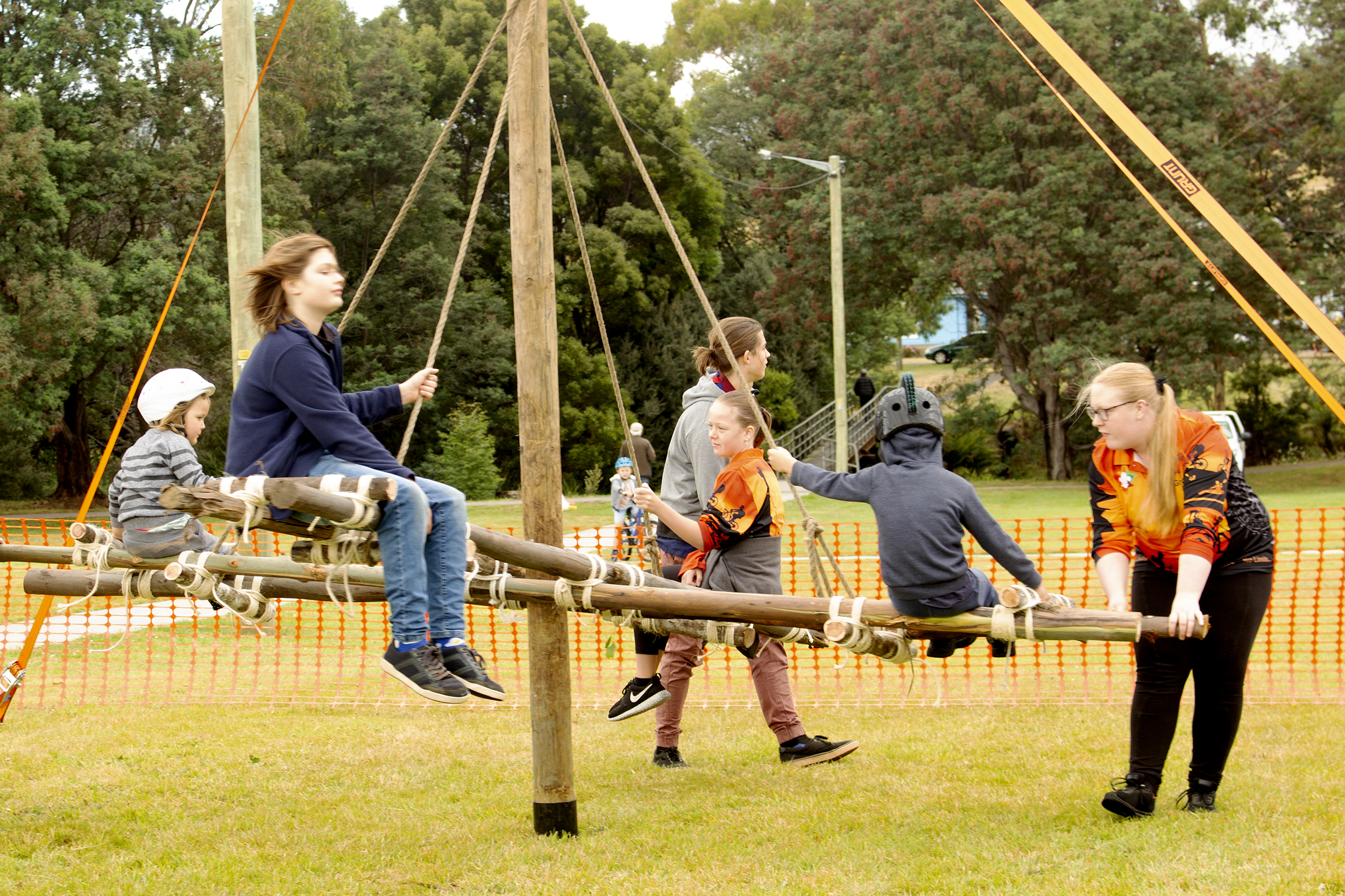 By mid-morning, attendees had settled inside the Geeveston Community Hall to show their support for a group of Australia’s newest citizens from Austria, the United States, New Zealand, Taiwan, Finland, and the United Kingdom. The eight Huon Valley residents taking their pledge of allegiance at Sunday’s ceremony were among a record number of more than 27,400 people who became Australian citizens this Australia Day at 450 ceremonies held across the country.

“I would like to give my warmest congratulations to our new citizens, who have come to us from Austria, the United States, New Zealand, Taiwan, Finland, and the United Kingdom,” said Cr Enders. “By choosing to call the Huon Valley home you are enriching the cultural fabric of our community and we wish you the very best for a healthy and happy life here.”

Cr Enders respectfully acknowledged that Australia Day was also a day of sadness for many Aboriginal people. “It’s a case of juxtaposition – on one hand you feel great empathy for your community and their sorrow and then on the other, you feel the absolute joy, pride and heartfelt emotion of your new citizens and their loved ones as they become Australian citizens. The day is very emotional.”

Our Australia Day Ambassador Deborah De Williams AM started off the Australia Day Awards presentation with a moving reflection of our journey as a nation, the stories that define us, and the values that unite us.

Council would like to congratulate our highly deserving award recipients for 2020:

“The Australia Day Awards allow us to give due thanks to the people in our community whose good and important work often flies under the radar,” said Cr Enders. “Each of our winners is being recognised for the difference they make in people’s lives and the care they continually demonstrate for the wellbeing of others in our community.” 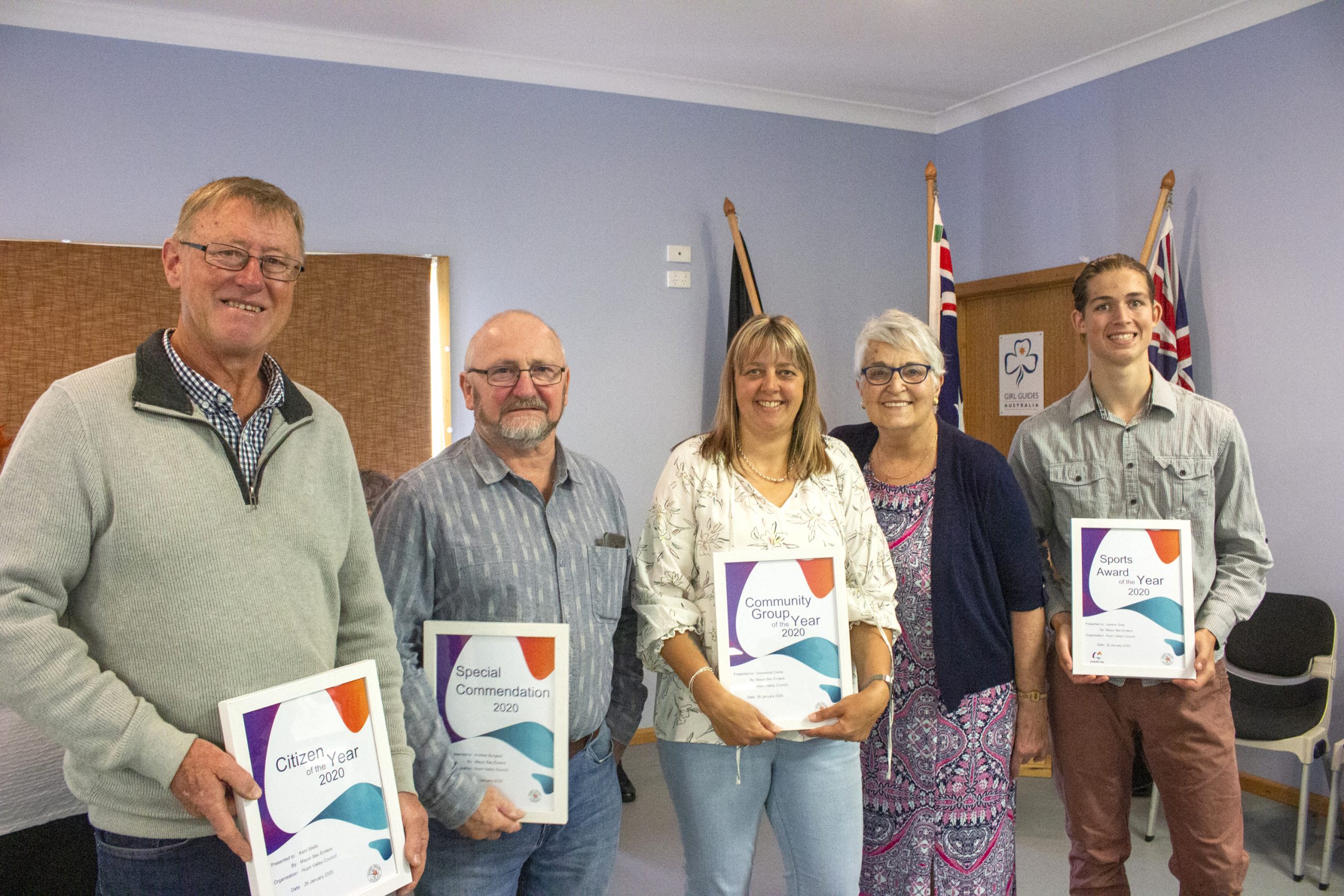 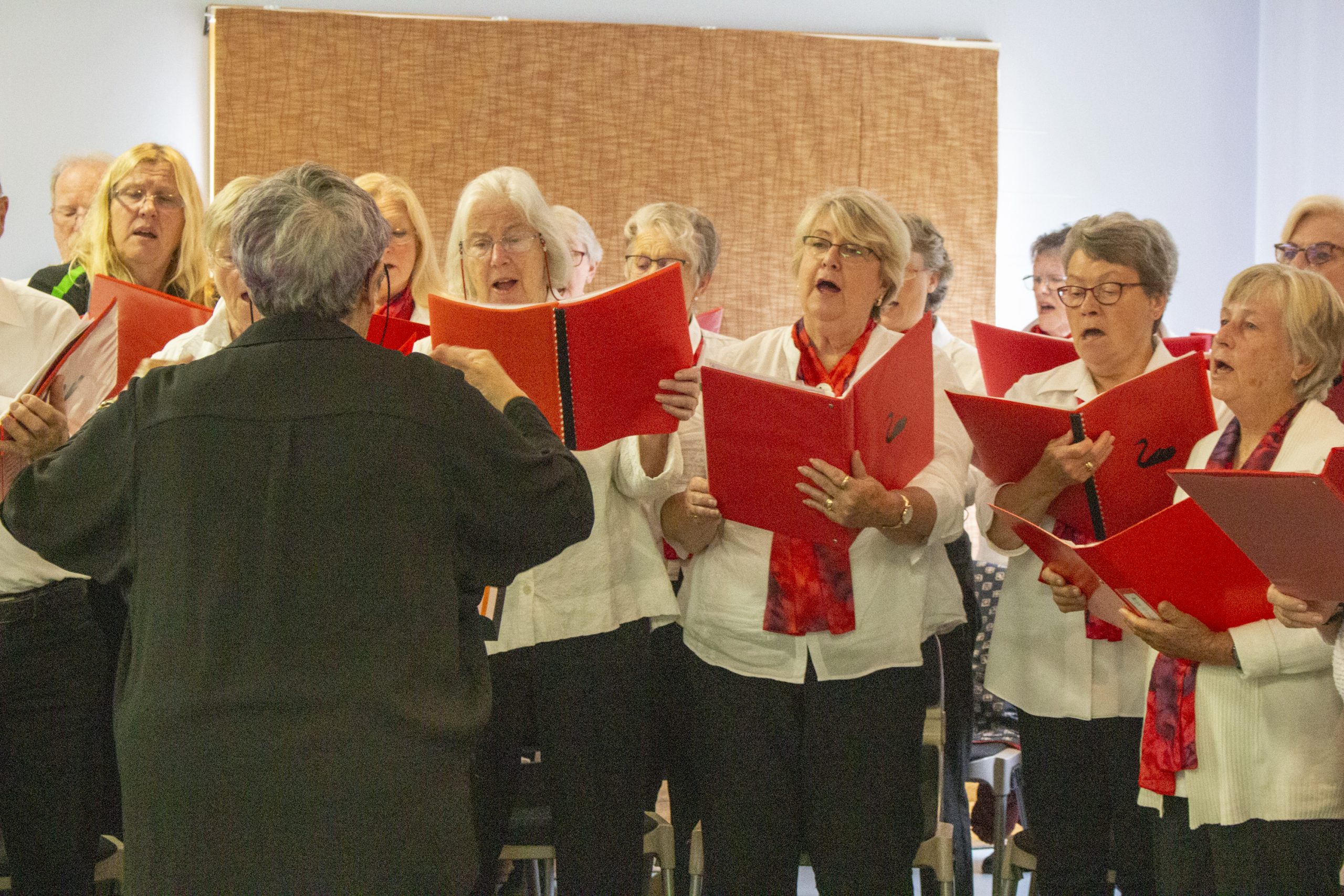 Before the proceedings drew to a close, the Cygnet Singers performed an uplifting rendition of ‘We Are Australian’ and the Huon Valley Council was presented with an Australia Day Award of its own. RSL State President Robert Dick presented Council with an Australia Day Achievement Medallion in recognition of the work that was done to protect the Valley during the bushfires that threatened our communities this time last year.

Cr Enders thanked the RSL for honouring Council and the Huon Valley community with the award.

“We appreciate the recognition it brings to our staff, who had a robust plan in place to look after our people during the bushfires and worked tirelessly to successfully run our evacuation centres and coordinate information sessions,” Cr Enders said. “More than 29 organisations and many individual volunteers were involved in the evacuation centres and we are privileged to accept this award on their behalf. 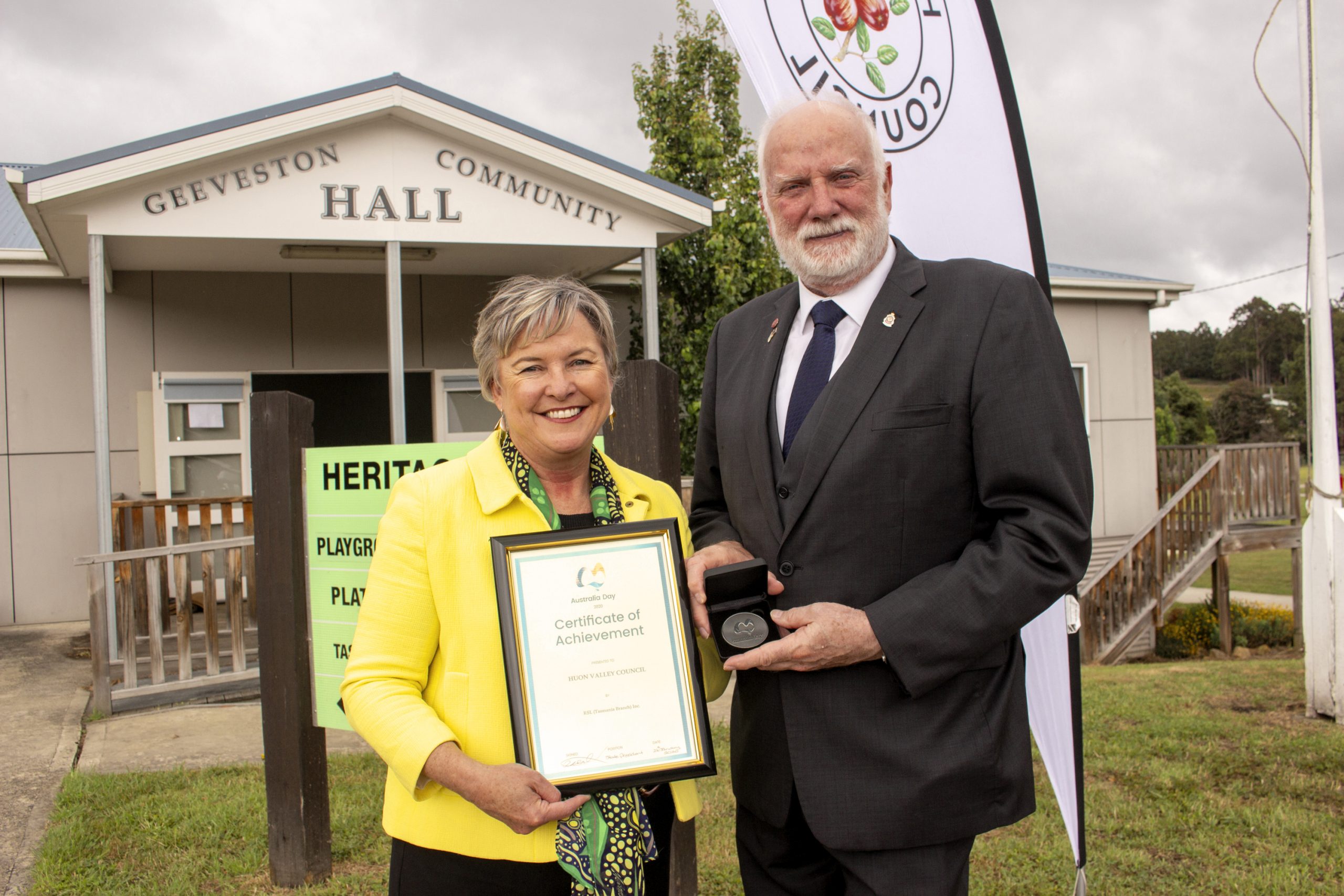 “The strength of volunteering in our community is what sees us through the hard times, so it means a lot to have this formally recognised.”

Deputy Mayor Sally Doyle publicly thanked the Council staff and volunteers who had a hand in the Australia Day event during announcement time at last week’s Ordinary Meeting of Council on 29 January.

“I thought it was a great event and would like to give a big thank you to our dedicated staff and volunteers for the time, care and hard work they put in,” said Cr Doyle.

Download a print-friendly version of this media release here. 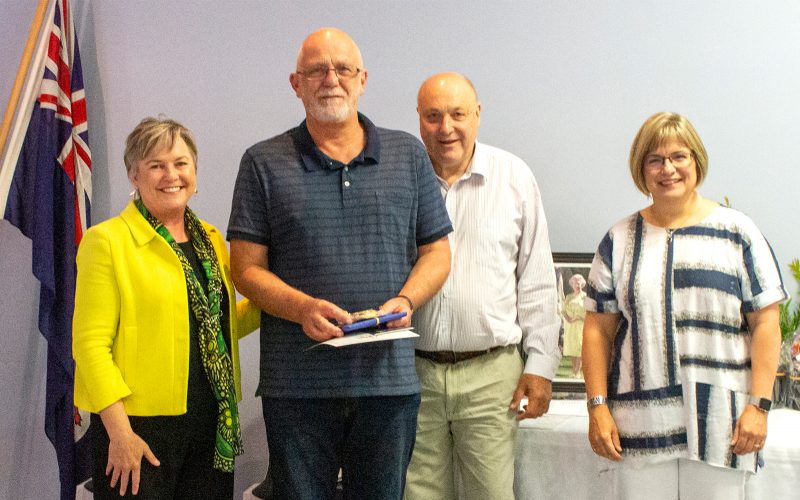