Ecological corridors are strips or sections of natural habitat within an otherwise transformed landscape that provide connections between large areas of natural habitat. These corridors facilitate the movement of fauna and flora and maintain natural processes such as pollination, seed dispersal, and genetic exchange.

Ecological corridors are an important component in climate change adaptation. Changes to rainfall amounts and intensity, temperatures means and extremes, and seasonality of weather events, are likely to displace a range of different organisms. Recent studies of have indicate that almost half of all species are ‘redistributing’ in response to changing climate conditions. An example of this is the movement of temperate species further south to avoid increased temperatures (closely followed by warm weather species colonising temperate areas which they were previously excluded from).

The following article gives further details and examples of this. Examples of corridors include retained riparian woodland along streams and rivers, patches of bush or single trees in pastureland (sometimes termed ‘stepping stones’ as animals will use these as cover as they move across the landscape), and windrows or bushland along property boundaries. The following image illustrates how these corridors are placed in the landscape (source: www.environment.gov.au) 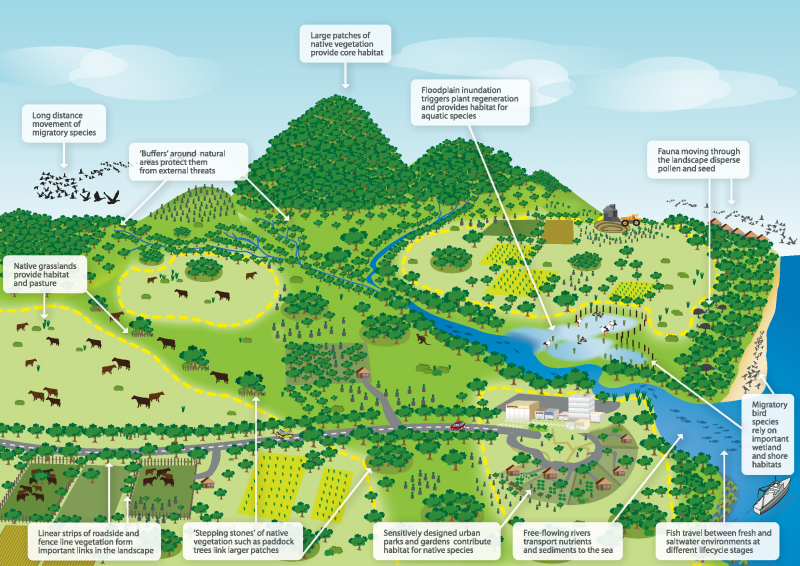 You can contribute by maintaining bush clumps and windrows in pastureland and urban areas. If you would like to reinstate wildlife corridors by re-vegetation, contact your local land care group or the NRM coordinator for further advice and possible assistance.

Further information can be found at these links: