Land managers throughout the Huon Valley gathered at Burtons Reserve recently for a workshop on cultural burning, the first workshop of its kind to be facilitated on council land.

Led by Jason Andrew Smith, palawa man, a cultural burning educator and fire practitioner and hosted by the South East Tasmanian Aboriginal Corporation (SETAC), the aim of the workshop was to share knowledge and experience to the wider community of caring for country through cultural burning.

“We’ve all got a connection to this land. There’re not enough Aboriginal people on this island with knowledge to look after it the way that our old people did so we need everyone to play a part in this, it’s got to be all as one, Aboriginal and non-Aboriginal,” Jason said.

“When we start to take on that caretaker-ship role rather than ownership, that will really open the doors. That goes right through to councils, Tasmanian Fire Service and Parks and Wildlife. There’s immense power in all these groups coming together and working with us on cultural burning practices.”

Acting Mayor Sally Doyle said during the development of Council’s Reflect Reconciliation Action Plan there were several suggestions put forward for how Council and the wider community could act to better understand and support local Aboriginal history and culture.

“There were many thoughts and ideas shared during these discussions and among them was to recognise the importance of cultural burning and management of the land,” she said.

“Facilitating a cultural burning workshop on council land shows our commitment to building genuine and meaningful relationships with the local Aboriginal community and the respect we have for cultural knowledge and practice.

“I think we can all benefit from Jason’s knowledge of the landscape and his deep and profound connection to the land.

“Burton’s Reserve is a council managed park in the Port Cygnet wetlands. The area has been traditionally used by the Melukerdee people for food, fibre, shelter, medicine and tools.  The wetlands has many natural values and an array of wildlife.

“Jason’s workshop demonstrated how important it is for people involved in land management to deepen their relationships with the land and animals while working to build resilient landscapes.”

“The program was developed in response to identified needs to re-establish cultural burnings, to add value and educate all on the importance of using traditional Aboriginal cultural practices for caring for Country,” she said.

“We are very interested in formalising strong partnerships in land management. We have received further funding to restore the use of cultural burning through education of traditional fire and land management.

“We live in an environment that needs fire. In the coming years we are at risk of catastrophic levels of fire. If we don’t manage these spaces, what we are finding now is that people’s properties and lives are at risk. We need to do this work using different methodologies that complement each other.

“SETAC’s goal is to empower our community, the Custodians of the land, to work towards healthy, functional, and resilient landscapes.”

“It was great to learn more about how cultural burning can be used for healing the land, particularly because this is such a big part of what Landcare aims to do.”

Chris Wilson from Abels Bay Coastcare said his group were keen to introduce cultural burning on the coastal strip at Abels Bay.

“I have deep respect for traditional land management techniques, and I think we need to talk about it further. It’s fantastic that we’ve got people like Jason who are willing to incorporate that traditional knowledge with our knowledge. His approach is so inclusive.

“For those living in the country it’s our responsibility to look after that country. If we don’t do anything we’re going to end up with more and more disasters.”

Carol Hurst from Huon Valley Roamers Landcare said the workshop highlighted the importance of developing deeper connections to the land as a way of good land management.

“And rather than the dichotomy of the Aboriginal way and the non-Aboriginal way, it’s working together and if we don’t work together, we’re sunk.” 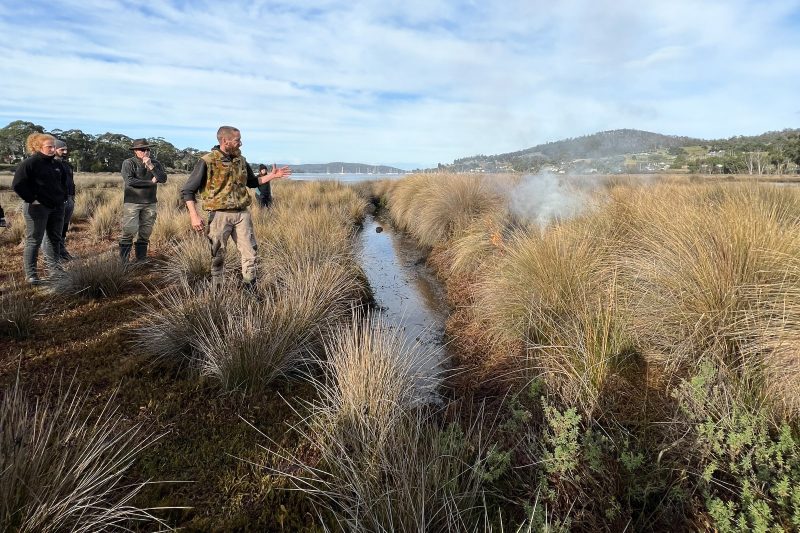